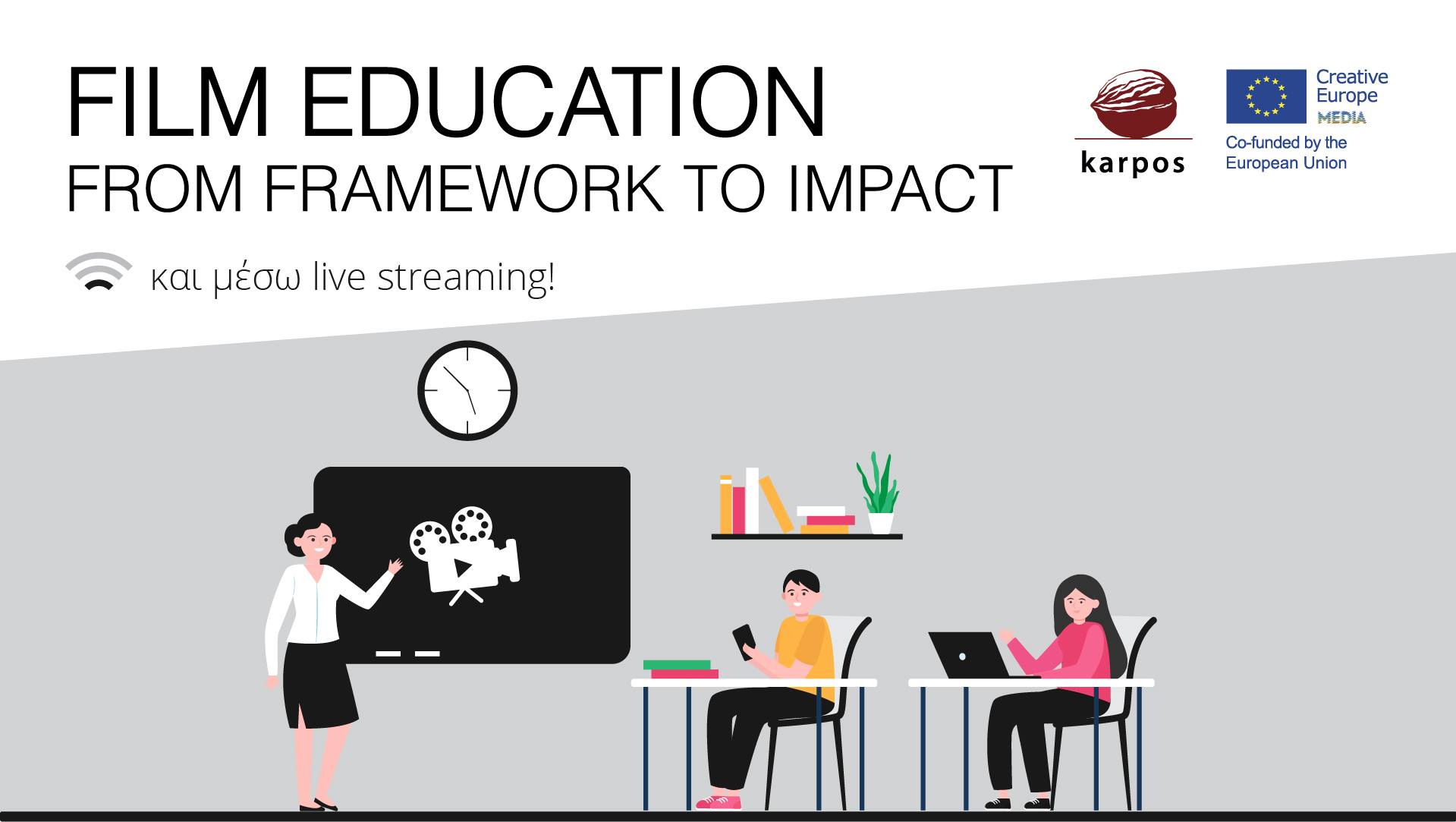 A 2 day Seminar on Film Education part of the European program Film Education: From Framework to impact.
The two days will be full of :panels, discussions and workshops around the subject: How can we include Film Education in the National School Curriculum?
You can participate online in our 5 workshops and 3 panel/ discussions by clicking those links. These links are valid for the whole day. There is simultaneous translation in English for both days:
Friday October 9th
https://us02web.zoom.us/j/82842154208
Saturday October 10th
https://us02web.zoom.us/j/87287245296

11.00 – 13.30
What would be necessary and possible in the field of Film Education on a national scale?

11.15-12.00
Integrating Film Education in the National Curriculum:
Is this compatible with the activity of Film Education Institutions?
M.Theodoridis, Film director, designer of AV Education programs

Film Education in neighboring countries and what can be done
Cyprus: A. Xenofontos, Educational Officer, Cultural Services / Cinema Section
Bulgaria: R.Assenova, Director of the platform Meetings of Young European Cinema and initiator of the Cinema in School programme of Arte Urbana Collectif.

12.15-13.30
Views and suggestions for the introduction of Film Education in the Greek National Curriculum
Presentation of the pilot survey on film education conducted by Karpos amongst institutions and educators

15.00-17.00 – WORKSHOPS
Focus on: How to watch and talk about film
A session with 5 workshops starting the first day and ending the second day of the seminar. Participants will actually follow sessions of 40 minutes which will use a selected film extract of 5’-10’ and then be led in an activity or discussion by the speaker / trainer. It is a simulation of how those workshops could work in a classroom.

16.00 – 17.00
Watch and talk about film 2
“Intuition as knowledge: CinEd’s pedagogy”
Design – Implementation:
R. Assenova, Director of the platform Meetings of Young European Cinema and initiator of the Cinema in School programme of Arte Urbana Collectif. She is currently a PhD student at the National Academy of Theatre and Film Arts, Bulgaria.

12.00 – 12.40
A European online course on Film Education and
the French experience

The MOOC and its impact: an online tool for introducing adults to Film Education in 10 steps
Presentation of the basic structure and function and its results. Announcing the re-opening of the MOOC and the site for the project.
I. Wall, The Film Space , runs training programmes and makes film education resources

The situation in France, a country with a long history in cinema,
N. Bourgeois, Head of the Educational Department, La Cinémathèque Française.

17.00 -17.30
What have we learned from the ‘watch and talk’ workshops and how can we apply them in a school environment?
Invited local and European experts on Film Education to discuss what they thought of the workshop sessions of the seminar.
Panel:
K.Vorros , Phd Candidate in Media Education, UCL, Teacher
E.Dimitropoulou, Director, Educator, Phd Candidate University of Aegean
A.Kovotsos, Director, Collaborator of Chania Film Festival
M.Reid, Head of Education, BFI

Karpos is organizing one of the 4 European Seminars on #Film #Education in Athens 9&10 October!

During the Seminar, there will be discussions, panels, and 5 ”show and tell” workshops implemented by European and local film education experts!

For the sessions and workshops that are done in Greek, we will be having a simultaneous translation in English.

All the sessions will be #livestreamed so you can watch them online and participate!